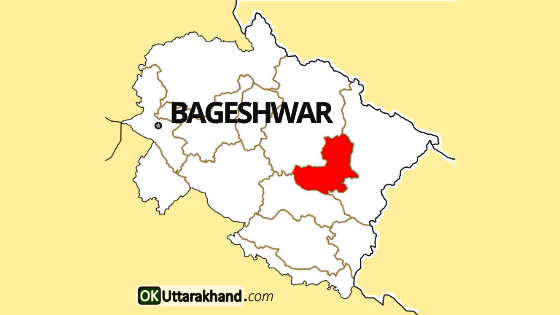 Bageshwar district is one of the hilly districts of the state of Uttarakhand. Headquarter of the district is the town of Bageshwar. It is situated at the confluence of rivers Saryu, Gomti, and latent Bhagirathi. Bageshwar is also revered as the pious land associated with Lord Sadashiva, the redeemer of all sins. According to Puranas, this undoubtedly is a place capable of liberating one from the eternal bondage of births & deaths.

Bageshwar is known for its scenic beauty, snowy Himalayan mountains, Glaciers, Rivers, and Temples. Bhileswar and Nileshwar mountains lie in the east and west of the Bageshwar and it surrounded by Suraj Kund in the north and Agni Kund in the south. This land of Lord Shiva has many tourist destinations and hill stations like Kausani, Bageshwar, Baijnath Temple.

Today we will give you a glimpse of the Bageshwar district. Here you will find a detailed guide on tourism, weather, education, distance, route map and places to visit in Bageshwar.

Bageshwar at a Glance

Bageshwar district has historically been a part of the Kumaon Kingdom. The current area of Bageshwar was known as Danpur that time.

7th -10th Century: Danpur (Bagrshwar) was located adjacent to Kartikeypura which was the capital of Katyuri Kings that ruled over Kumaon in the 7th century. After the disintegration of the Katyuri kingdom in the 13th century, the area of Danpur remained under the rule of Baijnath Katyurs. They were direct descendants of Katyuri kings.

In the 10th century, the Chand kingdom was established by Som Chand. He displaced the Katyuri Kings. He called his state Kurmanchal and established its capital in Champawat in Kali Kumaon.

1191-1565: According to historians, Nepalese invader King Kranchaldev won the Bageshwar region by defeating Katyuri kings in 1191. He later weakened the Katyuris and kept his local governors to rule the region. These governors later became independent before Chand king “Balo Kalyan Chand” of Almora won the region from local Khas rulers (Nepali Rebelion) in 1565.

In 1565, king Balo Kalyan Chand from the Chand dynasty annexed Danpur along with Pali, Barahmandal, and Mankot to Kumaun. In 1568, Kalyan Chand established a permanent capital at Khagmara and called it Almora.

1791-1816: Gorkha of Nepal attacked the Kumaun Kingdom and expand their kingdom across the Kali River in 1791. Almora and other parts of Kumaon including Bageshwar were invaded and annexed by them. At that time Bageshwar was the part of Almora

The Gorkhas ruled this region for 24 years and were later defeated by the Britishers in the Anglo-Nepalese War in 1814.

They were forced to cede Kumaon to British India as part of the Treaty of Sugauli in 1816.

After its annexation by the British (East India Company), Bageshwar was a part of the Danpur Pargana (similar to tehsil) in the Almora district of United Provinces. Britishers joined the Kumaon region with the eastern half of the Garhwal region and was governed as a chief-commissionership. It was also known as the Kumaon Province, on the non-regulation system.

According to Atkinson’s Book “The Himalayan Gazetteer”, Bageshwar had a population of 500 in 1886.

The first motor road arrived in the Bageshwar district in 1952 from Almora To Garur. Bus services started operating on the Bageshwar-Kapkot highway in 1955-56. After the 1962 India-China War, an important strategic road connecting Bageshwar with Pithoragarh district was completed in 1965.

The district headquarter, Bageshwar was declared a town in 1955, under the UP Town Area Act of 1914. The first Town area committee was constituted in 1957. Bageshwar received the status of a notified area committee in 1962 and municipal Council in 1968.

Here are the answers to some most frequently asked questions like what is the population of Bageshwar? And many more about Caste, Religion, Culture & languages in the Bageshwar district.

As of 2011, Bageshwar is the third least populous district of Uttarakhand after Rudraprayag and Champawat.

The major first language of the Bageshwar district is Kumaoni, which accounted for approximately 94% of the population. Although Hindi and Sanskrit are the official languages of the state. Garhwali, Punjabi and Urdu are also spoken by a small number of people. According to the 2011 census,

As of the 2001 Indian census, the Bagheswar district had a population of 249,462. The majority of people are Hindus, Other religions practiced in Bageshwar are Islam (Muslims), Sikhism, Christians, and Buddhism.

Bageshwar district is divided into 4 subdivisions. It has 7 tehsils, 3 blocks, 1 Municipal Council and 1 Nagar Panchayat. The district covers 940 Villages and 5 Police Stations.

There are 7 tehsils in the Bageshwar district including 1 Sub-tehsil.

There is one (1) Parliamentary Constituency in Bageshwar district that is Almora Lok Sabha Constituency.

There are mainly government and few private aided schools in the city. The language of instruction in the schools is either English or Hindi medium. The main school affiliations are CBSE, CISCE or State Board, the state syllabus defined by the Department of Education of the Government of Uttarakhand.

In Bageshwar, the first public school was started in 1926, which was made junior high school in 1933. Another private high school was opened in 1949 in memory of Victor Mohan Joshi, which is now an Inter College.

Some of the other schools and colleges in Bageshwar are listed below.

Bageshwar district is nestled amidst misty hills and located at the confluence of the Gomti and Saryu rivers. At a height of 960 meters above sea level lies the holy town of Bageshwar. Bageshwar is known as “the land of Sadashiva”, has attracted saints and devotees through ages.

According to ‘Puranas’, this is the ultimate place that liberates one from the bondage of birth and death. Apart from its religious sanctity, Bageshwar is also a paradise for trekkers.

Adi Shankaracharya trekked in the Himalayas in the 8th century. He was a pioneer who opened trekking routes in this part of India. Trekking adventure season which till recently was confined to the summer months in this region now covers almost the full year including winters.

Bageshwar is the entry point to the most popular trekking routes like Pindari, Kafni and Sunderdunga Glaciers. There are a number of tourist destinations and places to visit in the Bageshwar district.

Places To Visit in Bageshwar

Kausani Hill Station: Kausani is a village in Bageshwar district which is famous for its scenic beauty, snow-clad peaks, misty valleys, and pine forests. This emerging Hill station has so much to offer to tourists. Mahatma Gandhi spent 12 days here in 1929. “Anasaktiyoga” is a book written by Mahatma Gandhi. In this book, he tagged Kausani as the ‘Switzerland of India’.

Kausani the birthplace of the famed poet Sumitra Nandan Pant. Situated among mountains and trees, the peaks Trishul, Panchchuli, and Nanda Devi are clearly visible from here. Kausani is ideal to visit with the family. Because of its beauty, tourists come here all through the year. Other places to visit near Kausani are Rudradhari waterfall, Sumitranandan Pant Gallery and Anashakti Ashram.

Bagnath Temple: The temple of Bagnath dedicated to Lord Shiva. Devotees gather here on ‘Shivratri fair’ to worship the Lord Mahadev. A large temple with conical towers stands at the junction of rivers, Gomti and Saryu. It is the shrine of ‘Bageshwar’ or ‘Vyaghreshwar’ (the Tiger Lord), an avatar of Lord Shiva.

Temple was built by the Kumaon king Laxmi Chand in about 1450 AD. The temple complex has a cluster of temples, prominent among them being Bhairav temple, Dattatray Maharaj, Ganga Maa Temple, Hanuman Temple, Durga/Kalika Temple, Thingal Bhairav Temple, Pancham Junakhara and the Vaneshwara temple.

Chandika Temple: This temple is dedicated to the goddess ‘Chandika’. the temple stands at a distance of about 1.5 km from Bageshwar. Thousands of devotees congregate here to offer obeisance to the deity, during the Navaratri every year.

Gauri Udiyar Cave: Gauri-Udiyar is a religious place situated 8 km from Bageshwar. It has a cave temple of Lord Shiva enshrines several images of Lord Shiva which makes it a must-visit place in Bageshwar. There is a large cave measuring 20 X 95 sq m, housing the idols of Lord Shiva.

Mool Narayan ‘Shikhar’ Temple: Shikhar Temple is located at the Shikhar Mountain and named after the God Mool Narayan. This temple can be reached by an 18 km motorable road from Kapkot to Sopra followed by a 5 km bridle trek.

Baijnath: The ancient town of Baijnath is situated at an altitude of 1126 meters on the bank of River Gomti. Baijnath Temple is dedicated to Lord Shiva.

Bijaypur: Vijaypur or Bijaypur is a beautiful hill station situated in the Bageshwar district. The distance between Bageshwar to Bijaypur is 30 km from. Vijaypur offers a fascinating and splendid view of the snow-covered Himalayan range.

Kanda: Kanda is a tehsil in the Bageshwar district. This picturesque place situated at 1500-1900 m above sea level is a treat for nature lovers. There is an ancient Bhadrakali temple that stands very close to Kanda. Bageshwar To Kanda distance is 25 kilometers.

Pandusthal Trek: Pandu Sthal is the hilly stretch of around 1.5-kilometer width, amidst forests and wilderness. It is believed that the Pandavas and their cousins Kauravas from the ancient epic Mahabharat, is fought here

Some of the Other beautiful Temples in Bageshwar are listed below:

The best time to visit Bageshwar is from October to May. As Bageshwar is surrounded by Himalayan peaks, hence during winter season temperature of this place falls to 8°C. The peak season is from December-February in winter, it is the ideal time to enjoy the freezing environment. The places like Kausani hills seem sightseeing and mesmerizing during this time.

One can visit Bageshwar all year round, except for the monsoon season. Since the district is in the lap of the Himalayan mountains, you can imagine the scenic view and breezy summers that Bageshwar has.

How To Reach Bageshwar

Bageshwar is easily accessible from all nearby districts of Uttarakhand by roads, rail, and airways. This breathtakingly beautiful district is located at the altitude 1004 to 1890 m above the sea-level. Bageshwar district is well connected with the other hill resorts like Almora, Ranikhet, Pithoragarh, Gwaldam and Nainital through road route. If you are planning to visit Bageshwar then here we are sharing all the modes of transport.

How To Reach Bageshwar by Air

The Nearest airport from the Bageshwar district is Pantnagar. There are Dehradun To Pantnagar flights available on a daily basis. Taxies and buses to Bageshwar are available directly from the airport. Bageshwar to Pant Nagar Airport distance is 206 km.

How To Reach Bageshwar by Train

How To Reach Bageshwar by Road